Warning: count(): Parameter must be an array or an object that implements Countable in /home/customer/www/communecharleston.com/public_html/wp-content/themes/commune/includes/admin/libs/metaboxes/init.php on line 756
 Daniel Heinze | Commune. 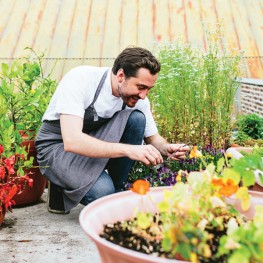 In his five years as part of the McCrady’s team, Daniel Heinze honed his skills as a line
cook and sous chef, before earning the title of Chef de Cuisine. As a young chef who thrives on being creative and learning new techniques and ways to create his food, Heinze is relishing the opportunity to take his culinary game to the next level. “Working under Sean Brock has been an incredible learning experience—he has taught me so much,” Heinze says. “I’m also enjoying being a leader in the kitchen now, and the team we have is really amazing and dedicated.”

A native of Vero Beach, FL, Heinze’s career path took a slight twist after he spent time as
a server in a restaurant and realized the front of house wasn’t for him. “It was seeing the cooks in the kitchen that inspired me to further my career in food and the culinary world,” he recalls. Heinze then enrolled at Johnson & Wales University in Miami, from which he received his associate’s degree in culinary arts.

Upon graduation, Heinze worked for two years as head line cook under Chef Norman
Van Aken at Norman’s in Miami before relocating to Charleston, SC, and joining the McCrady’s team. As Chef de Cuisine, Heinze, 30, oversees the day-to-day operations of the restaurant and manages a staff of over 20 employees. He crafts the restaurant’s menu daily and works directly with Executive Chef Sean Brock to create new dishes from Charleston’s finest ingredients. “I enjoy both the freedom and the restrictions we have when creating new dishes,” Heinze notes. “It teaches discipline, both inside the kitchen and out.”