Warning: count(): Parameter must be an array or an object that implements Countable in /home/customer/www/communecharleston.com/public_html/wp-content/themes/commune/includes/admin/libs/metaboxes/init.php on line 756
 Patrick Owens | Commune. 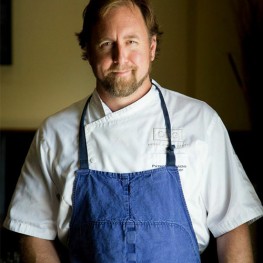 A Charleston native, Patrick Owens’ knowledge
and passion for Southern cuisine runs deep,
cultivated as a child in his grandparent’s kitchen
and at Lowcountry fish fries at the family cabin
on the Pee Dee River. A Clemson marketing
graduate, Patrick played guitar professionally
while working his way through various kitchens in
Charleston, learning his craft slowly and surely.
He started his official culinary career as soon as
he was old enough to hold a job, catering with
Charleston Bay Gourmet as a teenager and later
moving into more serious posts at Circa 1886 and
Magnolia’s.

At just 27, Patrick seized an opportunity to have
his own restaurant, and opened Langdon’s
Restaurant + Wine Bar (Langdon is Patrick’s
middle name) in a tucked-away shopping center
in Mt. Pleasant. Fast-forward 10 years, when
Langdon’s has since become a bright spot in the
local dining scene, garnering the praise of locals
and tourists who praise Patrick’s “top-tier” fare
and “excellent wine list.” Under Patrick’s
leadership, Langdon’s continues to shine, earning
the only AAA Four Diamond award East of the
Cooper every year since opening.

Nearly 10 years after the opening of Langdon’s, Patrick sought a new challenge and outlet
for cultivating his affinity for more casual, Mediterranean-style cooking. In 2011, he opened
Opal Restaurant + Wine Bar, his own take on an inviting, California-style eatery with a
bustling bar, legendary charcuterie plates, handcrafted pastas, and the same level of
attention to service and detail as the more formal Langdon’s. He has succeeded in creating
a place where people gather, imbibe and enjoy well-executed, unpretentious food. As one
local critic said of Opal, “With its one-page menu, daily specials, and comfortable vibe, the
appeal of this fine dining option in Mt. P already reaches far beyond the neighborhood.”

As one of the only top local chefs to grow up in the area, Patrick has remained committed
to and passionate about his hometown, giving back to a number of local causes and
charities. His undisputed talents as a chef and humble disposition continue to be lauded by
his long-time loyal fans, and have attracted the attention of a national audience as well. In
2013, Patrick was invited to cook for a sold-out dinner at NYC’s James Beard House. Patrick
has singlehandedly raised the standard on cuisine in Mt. Pleasant and he takes great pride
in creating dining experiences that endure the test of time.